TORONTO- Proxies of the Russian government in Toronto are planning a large scale pro-Soviet rally in Toronto’s Earl Bales Park for Sunday, May 8, 2016.

The same group organized a rally in 2015, which featured hundreds of Soviet flags including the flags of Soviet occupied nations.

We encourage all Estonians in Toronto to contact their city councillor and ask that the city reject any permits issued for this demonstration of imperial neo-Soviet hate. Millions of Canadians whose families were terrorized by Soviet repression and genocide in Estonia, Latvia, Lithuania, Ukraine, Russia and elsewhere, are deeply offended that such displays of unbridled hate can occur in a city like Toronto.

The Estonian Central Council in Canada urges all public officials and media to condemn such events.

Below are points that community members can use when talking to their representatives about the offensive nature of the neo-Soviet May 8 celebration in Toronto.

If last year’s rally is followed, then calls for Moscow to re-claim „ownership” of the Baltic states and political control of central and eastern Europe is to be the underlying message.

Display of Hateful Symbols of Tyranny

Last year a sea of red Soviet flags dominated the event. This symbol is an explicit reference to Soviet dominance and is a deeply offensive symbol of repression and tyranny for the people of nations occupied by the Soviet Union.

A Hateful Celebration of Repression and Genocide

Lavishly costumed soldiers on parade wore authentic Soviet era army uniforms. The attire included authentic belts, boots, hats, etc. The promotional Soviet decals on cars were large and elaborate. The miniature flags, of which there were thousands (mostly Soviet) were well distributed amongst the public. The event was a well staged, professional production – an arrogant neo-fascist celebration of totalitarian Soviet imperialism and repression.

No one denies Russian contributions towards driving Nazi forces from eastern Europe. However, the present Russian regime refuses to acknowledge that this was the beginning of a brutal, totalitarian Soviet occupation that lasted for 50 years for millions of people. The Soviet occupation of the Baltic States, Ukraine, Belarus, Georgia, Armenia and other formerly occupied nations, included deportations, mass arrests, the liquidation of most the intelligencia, and the suppression and ethnic cleansing of indigenous populations. The flaunting of Soviet symbols is a direct affront to Canadians who for decades advocated for the self-determination for the peoples of that region and who suffered deeply traumatic terror at the hands of the Soviet regime.

Canada honours freedom of expression, why shouldn’t anyone be able to promote any political/ideological cause? While freedom of speech and expression must of course be honoured, a democracy also adheres to decency in public display. Canadians would never accept the public display and celebration of Nazi, Apartheid, Klu Klux Klan symbols. Activity that promotes the neo-fascist, autocratic colonialism of other peoples and international aggression should be treated with the condemnation it deserves.

The commemoration by Russians of an historic event – the victor over Nazi forces – is a legitimate occasion to mark with a public event. But to have it sabotaged by blatant Soviet propaganda is unacceptable. As such it is a deeply offensive demonstration of the intention of the current Russian regime to re-occupy and repress the Baltic States and people

The orange and black symbol is of Russian neo-fascist organisation NOD. 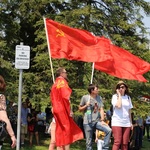 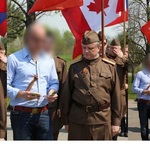 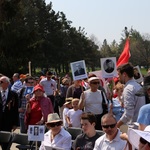 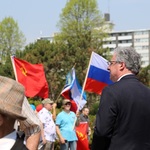 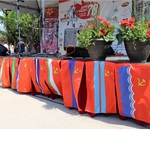