Last fall, the Estonian film festival in Toronto, EstDocs, screened the documentary The Story of the Baltic University (2015) by Helga Merits, the Estonian film producer currently living in the Netherlands. Based on the film, as well as the discussion following its premiere, the unfortunate truth was revealed. This extraordinary example of Baltic cooperation in DP camps is now being forgotten, despite works such as Prof. E. Järvesoo’s extensive anthology The Baltic University in Germany 1945-1949. Helga Merits’ enthralling film is changing this situation.

The Baltic University was a unique institution. It was created in the midst of chaos and started under the most difficult conditions in DP camps of devastated Germany. In the beginning, there was no scientific equipment, no means to acquire materials and no salaries for teachers. Despite these facts, within a few months, academics of the three Baltic States organized a university in Hamburg with eight faculties and 17 departments. The work at the university was at the same time an adventure and struggle, but nonetheless, the university was able to exist three and a half years and gave many Baltic students the possibility to start an academic career.

While collecting material for her film, Helga Merits completed a thorough and comprehensive research project, making some interesting archive discoveries. It was Helga’s idea to organize a conference and lecture series in the Baltic countries and other communities to celebrate the Baltic University’s 70th anniversary this spring. One of these events is taking place in Toronto mid-February.

The conference, The Story of the Baltic University (1946-1949): Adventure and Struggle will take place on Saturday, February 13th at 1 pm in Tartu College, 310 Bloor Street West. In addition to a lecture by Helga Merits, Jüri Kivimäe, Andrejs Kūlnieks, Tiina Kirss (via Skype) and Arnis Kuksis will be lecturing. In his youth, Arnis Kuksis actually studied at the Baltic University and will be sharing his memories from his time there.

Following the conference, the Baltic University exhibition will be opened, which was similarly a collaborative project between the Estonian Studies Centre/VEMU and Helga Merits. In addition to the materials from the E. Järvesoo and L. Puurits archives, the exhibition includes photos from a number of private collections.

At 5:00PM, after the lectures and exhibition opening, there will be a screening of the documentary film by Helga Merits: The Story of the Baltic University.

The working language of the conference is English. No admission fee. A small donation would be appreciated. Info: piret.noorhani@vemu.ca, t. 416 925 9405. For the full conference program visit: vemu.ca. 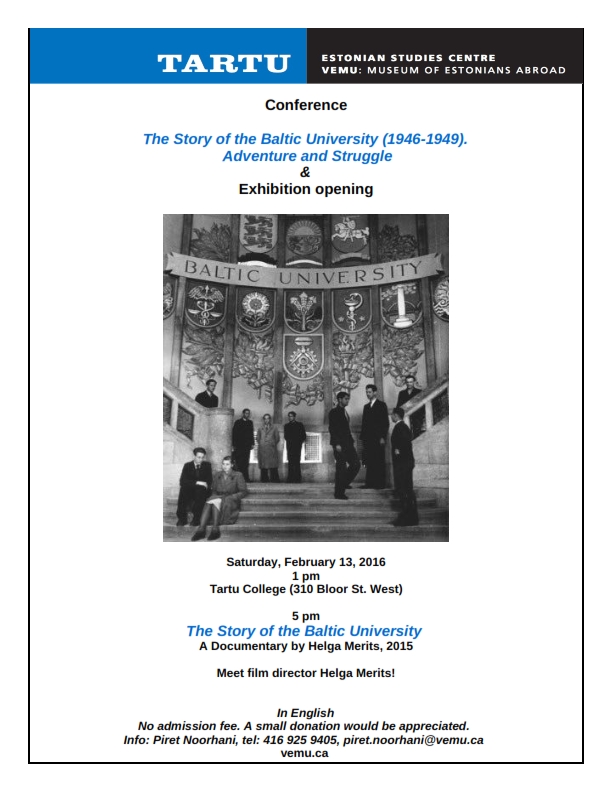