The Baltic Federation in Canada wishes to express its deepest sympathies to the families of the victims of yesterday’s heinous attack in Toronto. We pray for the quick recovery of those who were injured.

“Such a crime is unfathomable and says something about a breakdown of values in the world around us. On a warm spring day, in a robust and friendly city, no one could imagine such a vicious and cowardly act,” said Andris Ķesteris, President, Baltic Federation in Canada.

We are grateful to those bystanders and first responders who selflessly reacted and provided immediate assistance. The Toronto Police acted courageously in stopping the carnage.

In the Greater Toronto Area and across the nation, our large Baltic community of Estonians, Latvians and Lithuanians is shocked and dismayed by this tragedy. This was an attack on us all. As Canadians, we stand united in our hearts. 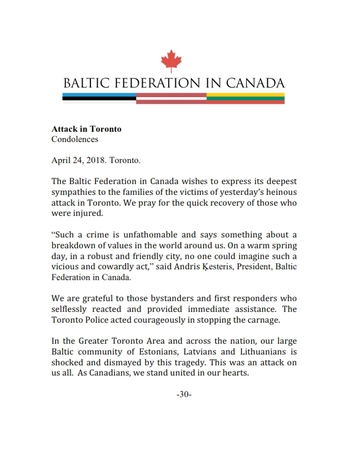