2022 has been an unbelievably tragic year for Ukraine.

When we as Latvians come together on June 14, we remember the 43,000 Estonians, Latvians and Lithuanians who were deported during the night between June 13 and 14, 1941. This year, since Russia invaded Ukraine, more than 1.3 million Ukrainians have been deported to Russia, including more than 230,000 children. Children have been separated from their families.

This June 14, let’s come together to remember not just the Estonians, Latvians and Lithuanians who suffered under the Soviet regime, but to show our support for our Ukrainian brothers and sisters. This event is organized by the Baltic Federation.  It takes place Tuesday, June 14, at 7:30 pm at Nathan Phillips Square in Toronto.

The 1939 Nazi-Soviet alliance was an agreement to divide up Europe, the result of which was World War Two. The first Russian invasion of Estonia, Latvia and Lithuania took place in 1940. The year that followed was marked by terror, torture, murder and ethnic cleansing culminating in a roundup of tens of thousands of Baltic families, forced into cattle cars, and transported to the furthest reaches of Siberia. Many died along the way from starvation, illness and mistreatment. Others were executed at their final destinations. This first mass deportation was carried out on June 13-14, 1941. During this violent colonization and genocide, even more horrific mass deportations would follow right into the 1950s.

Opening words: Līva Zemīte, president of the Latvian National Youth Association of Canada
Intro: Kairi Hemingway, president of the Baltic Federation
Address: Prof. John Jaworsky. Professor Emeritus of Political Science at the University of Waterloo
This will be followed by a prayer and the lighting of candles (which will be provided). 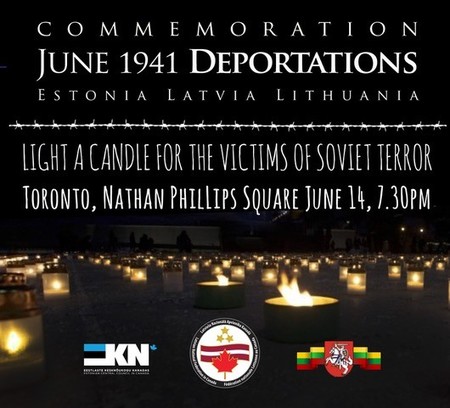