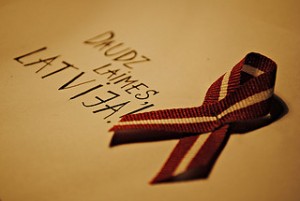 The Latvian National Federation in Canada is presenting its annual celebration in honouring the 96th Anniversary of the Declaration of Independence and establishment of the Republic of Latvia. Sunday, November 16, 2014. Church Service at 11:00AM, at St.John’s Latvian Lutheran Church, 200 Balmoral Avenue. Church service is followed by presentations, keynote speaker and concert at 1:30PM.

As the central organization for all Latvians across Canada, it represents its interests at city, provincial and federal levels, maintains contact with other Canadian NGO’s, and involves itself in projects both in Canada and Latvia. When non-Latvians want to speak to us, they often do so through the LNFC (LNAK).

All of the regular activities of the federation are managed by an executive board consisting of eleven members. The members are elected annually by a general assembly. The assembly consists of forty elected members and up to an additional forty appointees.

The 3 RCR contingent,   part of 2 Canadian Mechanized Brigade Group based in Garrison Petawawa, will   relieve another contingent of soldiers who are currently participating in   Operation REASSURANCE and returning to Canada on September 24.

“The Government of   Canada remains firmly committed to building regional stability and security   in Eastern Europe . Canada and its international allies continue to condemn   the aggression of the Putin regime and its attempts to undermine the security   and sovereignty of Ukraine .”

“When Canadian Army   soldiers participate in multinational training exercises, it is an   opportunity for them to enhance their warfighting skills and increase   interoperability with our international partners. In addition, our soldiers   have gathered a wealth of operational knowledge and experience from previous   missions and Operation REASSURANCE is one platform where they can share their   expertise with Canada ’s allies.  Our soldiers are Strong, Proud and   Ready for the call of duty at anytime and anywhere in the world.”

“Canada   is committed to building capabilities and nurturing partnerships in Eastern   Europe, particularly in the wake of the Putin regime’s aggressive military   actions in the region. Our participation in Ex Maple Arch is an opportunity   to help build and improve upon the capabilities required to further regional   security in Eastern Europe.”

“Participation in Exercise MAPLE ARCH provides   Canadian Army soldiers with the opportunity to further demonstrate our   leadership capacity and proficiency in multinational coalition training   exercises which builds and strengthens relationships with our international   military partners.  In addition, Exercise MAPLE ARCH provides an   environment to enhance our military readiness towards a multi-purpose,   combat-capable force, able to operate seamlessly with allies and respond to a   multitude of threats.”

“Exercise MAPLE ARCH 14   is an excellent opportunity for all the nations involved. This is the third   Exercise MAPLE ARCH that I have been involved with, and it is consistently a   challenging and rewarding training experience for all participants.”

The   Partnership for Peace programme

The Latvian National Federation in Canada, the central organization for Canadians of Latvian origin, is alarmed to see a tragic repeat of history in Ukraine. Once again, we are witnessing brutal geopolitical tactics reminiscent of Nazi Germany, and its former ally Soviet Russia.

In Canada, young people of all ethnic backgrounds now see what their parents and grandparents had to endure over decades of war and occupation in Europe..

In a campaign of disinformation and total distortion of history, Ukrainian patriots are labelled extremists, fascists, terrorists and worse by an aggressive chauvinistic power. The Russian propaganda machine, designed to confuse the public, is working overtime.

The actions of the Russian government, a classic example of state terrorism, are illegal. The leadership must be held accountable for all criminal acts. The invasion of Ukraine is a matter for the International Criminal Court. Estonia, Latvia, Lithuania and Poland, just to mention a few, face continuous pressures and threats which undermine their social, political and economic fabric.

We appreciate the strong stand which has been taken by the Government of Canada. Freedom, security and human rights in Ukraine must be defended by all!

Office of the Prime Minister

Regarding the tragic invasion and occupation of Ukraine by Russian forces, it seems that history is being repeated in Central and Eastern Europe. The similarity to the tactics used by Nazi Germany, in alliance with Soviet Russia, is very alarming to the nations of Europe.

Our Canadian youth, whose roots are tied to ethnic groups in Europe, are now seeing what their parents and grandparents had to endure over decades of war and occupation. The reality has now been brought home to them in a most forceful manner.

Just as in the Ukraine, many nations of Europe have suffered through similar scenarios which began with ultimata, followed by military occupation, and further followed by torture, murder, disappearances and brutal ethnic cleansing by Russian forces.

The propaganda machine is also functioning very efficiently with its campaign of disinformation designed to confuse the western public. How more absurd can it be, when the president of Russia denies the existence of his troops in Crimea? Ukrainian patriots are labelled extremists, fascists, terrorists and worse by an aggressive chauvinistic power. Even children are being attacked by Russian mobs.

We appreciate the strong stand which has been taken by the Government of Canada and see an opportunity for our country to be a world leader in helping resolve the issues in a peaceful way.

It is clear to everyone that the actions of the Russian government are illegal, and in fact criminal. The leadership must be held accountable. This has become not only a matter of negotiation, but certainly one for the International Criminal Court. We are witnessing a classic example of state terrorism

In good faith, the Ukrainian government gave up its nuclear arsenal in return for a guarantee of its borders and independence. Russia was a signatory to this guarantee and has now violated international law and totally betrayed its partners.

The other nations bordering Russia, such as Estonia, Latvia, Lithuania and Poland, just to mention a few, are continously facing pressures and threats which undermine their social, political and economic fabric.

Appeasement of the rogue regime in Moscow is not acceptable. Looking back in history, whether to the time of the Hitler-Stalin Pact to divide up Europe, or more recent attacks such as in Georgia, Russia is once again testing the resolve of the West. Invading the Ukraine is simply another step in the attempt to renew geopolitical domination.

In actual fact, Russia has already initiated its war against NATO and the European Union.

We encourage the Government of Canada to continue its active vigilance in protecting sovereignty and human rights in the Ukraine and Central and Eastern Europe.

Member of the Board, Central and Eastern European Council of Canada