The 14th Latvian Parliamentary elections took place last Saturday, October 1. In Canada, 612 Latvian citizens participated, 537 at one of the four voting stations, and 75 by mail. Latvians in Canada overwhelmingly voted for New Unity - Jaunā Vienotība (57%). The next most popular party was the Progressives - Progresīvie (13%), followed by the National Alliance - Nacionālā Apvienība (7%) and Development/For! - Attīstībai/Par! (6%). The remaining 15 parties received 17% of the vote.

The turnout in Latvia was greater than in the last two elections – 59% of eligible voters cast their ballot as compared to 55% in the previous election. However the Latvian diaspora vote shrank – 16% voted as compared to 24% in 2018.

Here is the composition of the new 14th Saeima with a comparison to the 13th Saeima: 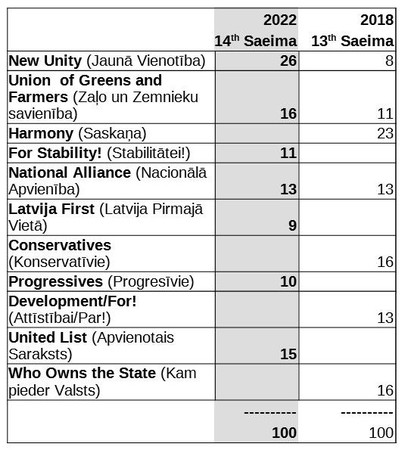 The current coalition has governed since January 23, 2019. It has consisted of New Unity, the Conservatives, the National Alliance, Development/For! and some members that were elected as part of the Who Owns the State party, with New Unity party leader Krišjānis Kariņš as Prime Minister. This government has held power longer than any other in the history of Latvia.

Latvian president Egīls Levits has asked Krišjānis Kariņš to lead discussions to form a new coalition for the 14th Saeima. As of October 7, it appears that the coalition could consist of either three (New Unity, United List, National Alliance) or four (+ Progressives) parties. New Unity would like to see the Progressives as part of the coalition, but the United List and National Alliance currently support a three-party coalition.

The new 14th Saeima will be sworn in on November 1.

Official voting results can be found on the Central Voting Commission’s website www.cvk.lv. There is detailed information on voting by district and by voting station.

We have created a chart where you can see how we in Canada voted city by city, and how that compares to the overall diaspora vote and the total election results.

Those of you who voted in Montreal and Vancouver can give yourselves a pat on the back, because 100% of your voting envelopes and ballots were valid. Mail-in votes from the diaspora had an unuaually high percentage of spoiled envelopes and/or ballots. In Canada, 15% of mail-ins were invalid; in the diaspora overall 33.5% were invalid. The World Federation of Free Latvians (PBLA) has written a letter to the Central Election Commission, pointing out shortcomings of the process, and requesting an explanation.