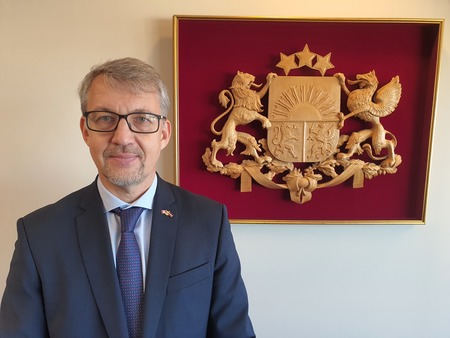 I would like to take this opportunity to greet you on the anniversary of the Latvian declaration of independence, which we will soon be celebrating together at a number of events in Ottawa, Toronto, Niagara Falls, and Hamilton. I look forward to meeting many of you in the uplifting, festive atmosphere that our national day calls for. On November 18 we look back on the events of the previous year—they are the backdrop for our celebration, and serve as a point of reference for our future hopes and aspirations.

This year has been especially difficult because of Russia’s unwarranted attack on Ukraine. It has touched all of us here in Canada as well as in Latvia. Our worst fears have been confirmed – Latvia’s revanchist neighbouring country is willing to employ lies, violence and barbarity to challenge the sovereignty of one of its neighbours. We cannot allow brute force to win. Even here in Canada, far from the atrocities taking place in Ukraine, we must be on the side of the victim with all the means at our disposal. By doing so, we also protect our own sovereignty.

Despite the present global crises, we can take heart in the fact that there has been stability in Latvia’s domestic politics. The last Saeima has just concluded its work having served its full term. The prime minister and his party have won the opportunity to form the next government. These elections also proved that every vote is important. A mere handful of votes was able to change the number of parties who entered the Saeima and the number of members each party gained. It is a positive development that the downward trend in voter participation seen in previous elections has been reversed.

Here in Canada, we will have to work to encourage greater voter participation in the leadup to the next Latvian elections. The voters here make a difference even if the number of Latvians in Canada is declining.

Since the beginning of my tenure in Canada, all of our meetings and conversations, whether in groups or individually, have been informative and valuable. I look forward to continuing our exchange of perspectives and ideas and working in close collaboration. I wish the new LNAK board and executive much success and creativity in the work their endeavours!

With all good wishes for Latvia’s Independence Day!