JĀbalso! Wednesday, August 31 8:30-10:00 am EDT Debate with candidates for the position of Prime Minister

The World Federation of Free Latvians (PBLA in Latvian) is organizing a series of debates in the lead-up to the October 1 Latvian parliamentary elections.  The first debate will be held Wednesday, August 31 at 8:30 am EDT.

Candidates for the position of Prime Minister will share their views on the tasks at hand, with a focus on defence.

Parties who are likely to receive over 5% of the popular vote (which is the minimum needed to obtain a seat in parliament) according to Factum ratings as of August 7 have been invited to participate.

The debate can be viewed at www.jabalso.lv, and on the PBLA Facebook page.  A recording of the debate will also be available after the event. 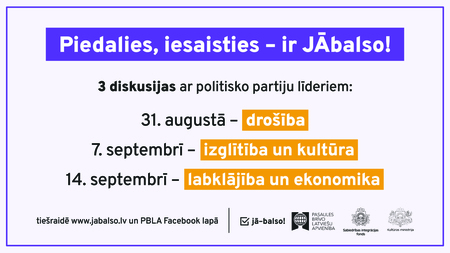