The first accreditation visit of a new Defence, Military, Naval and Air Attaché of Latvia, Lieutenant Colonel Agris Ozoliņš took place on the 6th of July 2017 at the Department of National Defence in Ottawa.

Lieutenant Colonel Agris Ozoliņš becomes the first Latvian Defence Attaché to reside in Canada. It is noteworthy that his accreditation occurs at a time when we are witnessing the successful launch of the enhanced Forward Presence deployments to the Baltic States and Poland and soon after the 19th June welcoming ceremony marking the establishment of the NATO enhanced Forward Presence Battlegroup in Latvia at its base in Ādaži near Riga; this welcoming ceremony was attended by the President of Latvia, the Secretary General of NATO, and the Canadian Minister of Defence as well as the Commander of the Canadian Armed Forces.

The NATO enhanced Forward Presence battlegroup in Latvia is led by Canada, whose soldiers are at its core. The battlegroup is currently manned by Albania, Italy, Poland, Slovenia and Spain, with a total of over 1000 soldiers.

Lieutenant Colonel Ozoliņš was warmly welcomed by representatives of the DND and NDF, and their discussions focused on bilateral defence co-operation between Canada and Latvia. The accreditation of a defence attaché resident in Canada is a reflection of the priority and importance of ensuring strong and enduring links between Latvia and Canada.

Congratulations and wishing all success to Lieutenant Colonel Ozoliņš with this new important post in this crucial time,
Kārlis Eihenbaums, Ambassador 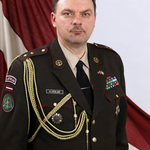