A New Sample Letter to send to your MP

Canada made significant announcements on June 29, 2022 at the NATO summit in Madrid to expand the NATO mission in Latvia, as well as to expand Canadian diplomatic services in the Baltics.  Here is a sample letter to send to your MP to express your support for these new commitments, as well as to urge Canada to continue to support the Ukrainians in their fight for survival in the face of Russian brutality.

If you have written a letter and are willing to share it for others to use, please write to us at politika@lnak.org.

Thank-you to the Canadian government for its actions and commitment to Ukraine’s sovereignty, territorial integrity and independence. As Russia continues its invasion of Ukraine, so too must Canada not let up in its support of Ukraine. The murder and displacement of the Ukrainian people, the forced deportation and separation of children from their families, the destruction of Ukrainian cities -- these are horrors that many of us Canadians can barely imagine. I urge Canada to not only continue, but to step up its efforts to supply the weapons, financial support, supplies, and leadership needed for Ukraine to prevail. Sanctions must be enforced and strengthened.

The Canadian public needs to be informed and reminded that Putin’s brutality in Ukraine is not just an assault on Ukraine, but a direct threat to NATO and an attack on democracy and freedom around the world.

As a Latvian Canadian, I applaud Canada’s decision to upgrade the NATO military force in Latvia from a battalion to a brigade. I am proud as a Canadian of the work that our NATO troops are doing in Latvia, and thankful for the increased security that the expanded mission will provide. Thank-you also for Canada’s expanded diplomatic presence in Latvia, Lithuania, Estonia and Slovakia.

Kudos to Canada for taking this leadership role on the world stage. 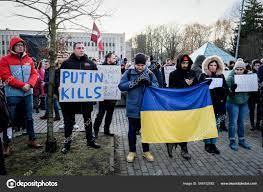