This article is intended for those who are new to voting in the elections or who would like a refresher. Although it is written in English, it is assumed that you know some Latvian. Please be aware that some of the links are to Latvian language websites, which may or may not have an English version available.

There are 100 seats in the Latvian parliament, known as the Saeima in Latvian. Elections are held every four years on the first Saturday in October. 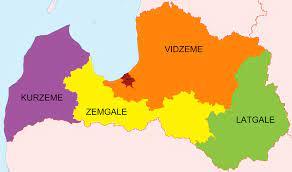 The 100 seats are allocated according to population. For the 2022 elections, seats will be divided as follows:

For those of us living outside of Latvia, we vote as part of the Rīga electoral district.

For a party to be eligible to run in the election, it must have been established at least a year before the election, and have at least 500 members. Here is the full list of the nineteen parties in the running this year: https://sv2022.cvk.lv/pub/kandidatu-saraksti

There can be as many candidates on each slate as there are potential seats in the electoral district. So for instance, a party can list up to 36 candidates in the Rīga district, but only up to 12 in Kurzeme.

Here is a made-up example of a slate: 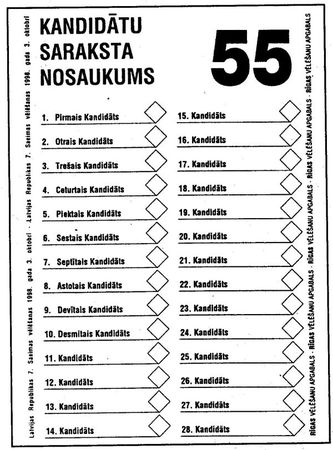 The party name, Kandidātu saraksta nosaukums is at the top. The party then lists their candidates for that particular electoral district, with their most favoured candidates (often called "locomotives" in Latvia, i.e. the heavy hitters) at the top of the list. In this example, if the Kandidātu saraksta nosaukums party wins four seats, the top four names on the list will be the party members who gain a seat in parliament.

1. Choose which political party you wish to support. (You can only pick one; you cannot mix and match candidates between parties.)

2. And now here is the interesting part. If you wish the candidates on your party’s slate were in a different order, you can push them up or down the list. To push them up, you put a plus (+) beside their name. To push them down, you cross out their name.

3. Deposit the slip for the party you are voting for into the ballot box as instructed (or mail it in as per the instructions you received; if you are voting by mail, your ballot must reach Ottawa by October 1).

The pluses and minuses can have a huge effect on the outcome. In the 2011 elections, a candidate who was listed first on his party’s slate got so many minuses that he didn’t get a single one of the six seats that his party won in the Rīga electoral district.

Latvia usually has a lot of parties in the running (and because of that usually has coalition governments, not majority governments). This year there are nineteen parties in the running. Some you have probably heard of, such as the current coalition parties, Jaunā Vienotība (with Krišjānis Kariņš, the current PM), Konservatīvie, Attīstībai/Par, and Nacionālā Apvienība, and then outside of the coalition, Saskaņa and Zaļo un Zemnieku Savienība. Other parties, such as Suverēnā Vara and Tautas Kalpi Latvijai are less well known, and are also low in the polls.

With nineteen parties to choose from, how to choose?

Here are some pointers:

- Do not choose by the party name
- for instance, despite its name, the Greens and Farmers Union (Zaļo un Zemnieku Savienība) no longer actually contains the Latvian Green Party, which is now running as part of the United list (Apvienotais saraksts) list

- follow the advice that Latvian president Egils Levits tweeted out a few weeks ago: do not rely on election promises, look at the parties’ past performance

- follow the ratings and be mindful that if you end up voting for a party that receives less than 5% of the popular vote, your vote will become irrelevant
- You can find the latest ratings here: reitingi.factum.lv ratings

- there are a couple of quizzes (in Latvian) that you can fill out to see which party’s platform lines up with your views:
- Partiju Škirotava https://www.lsm.lv/velesanas2022/partiju-skirotava/
- PBLA’s “Saderības tests” https://jabalso.lv/saderibas-tests/

But don’t rely on the quiz to tell you whom to vote for. It might tell you to vote for a party where you agree on eight out of ten issues, but if the two issues that you don’t agree on are your “hot buttons”, you will want to think again. What are the issues that you care about for Latvia? Is it a stable government, lower taxes, higher taxes, NATO, corruption, LGBTQ+ rights, the environment, the energy sector, language, etc. etc.? And we all know that promises cost nothing. Which party has a realistic plan, and capable, honest politicians?

Talk to your Latvian friends who have been following politics.

If your Latvian is good enough, listen to the recordings of the debates that have been held. They are a good way to get better acquainted with some of the leading candidates of the parties. Another way to get a sense of leading politicians is to follow them on Twitter; many of them often tweet in English.

www.lsm.lv has a four-part series in English with brief overviews of all the parties: lsm.lv Saeima Elections.
It is a really good introduction for those seeking basic information, and a good refresher for everyone else. (Please note that LNFC does not endorse any particular party or candidate.)

Please note that if a party receives 2% of the popular vote, they are entitled to receive funding (on a per vote basis) going forward. This can be very important for up and coming parties.

Detailed information on all the parties and candidates (including their birthdates, education and profession) can be found on the Central Election Committee’s website https://sv2022.cvk.lv/pub/kandidatu-saraksti

Some sections of the Central Election Committee’s website www.cvk.lv are available in English: https://www.cvk.lv/en